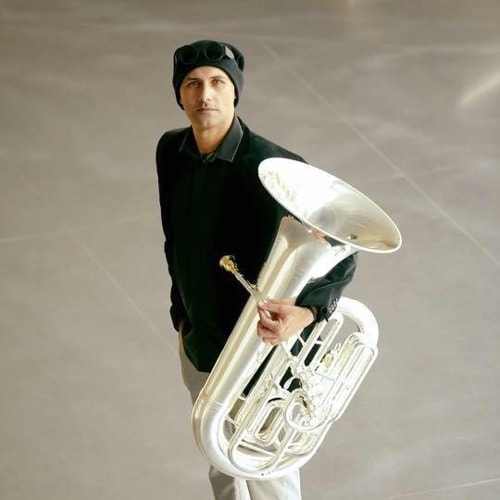 Collector of music works, records, awards, compliments, reputation, sunglasses, hashtags and selfies. Source of creativity and virtuosity. Eclectic, original and visionary. Curious by definition. Adventurous by choice. Owner of a pure heart and of Sparky, the Basset Hound. Transpires musicality and works to achieve excellence. Passionate about life, loves cinema, mythology, reading, fishing and spending time with his friends. Anyone who crosses with him will never forget him and leave, of that encounter, humanly and professionally richer.


He has always shown great curiosity and ability to explore different musical paths and languages.

Currently his international reputation has been established by his interpretation of the standard and contemporary repertoire for tuba and his stylistic approach to jazz, funk
and improvised music.


Sérgio Carolino, is one of the most acclaimed tubists, with constant activity as a soloist and teacher in the most prestigious festivals, conservatories and universities of the five continents. Received for four times the Roger Bobo Award Prize for Excellence in Recording (2008, 2010, 2012 e 2014), the Award for Emerging Jazz Artist (2004), the Carlos Paredes Prize (2004) and won the SPA Award 2013 - Classical Music Category (Portuguese Author’s Society) for the works published in 2012 and for promoting Portuguese music throughout the World.

Plays with his own signature design and concept mouthpieces by Brass Lab MoMo made by master Hirotaka Nakai (Osaka/ Japan), with the muted "Mushroom Cup Mute", manufactured by Johann Schlipfinger. Sérgio is also a professor at the School of Music and Arts of the Spectacle (ESMAE) of the Polytechnic Institute of Porto and Artistic Director of the world famous GRAVÍSSIMO! – Alcobaça  International Low Brass Festival & Academy.
Powered by